1963, November: The first Mass in the new parish is celebrated on November 17 at the Lynn Valley Community Centre on Frederick Road. Over 400 people were in attendance.
1964, March: The first meeting of the Saint Stephen’s chapter of the Catholic Women’s League is held.
1964, July: Renovations to the second house on the property are completed, and it becomes the parish rectory. This small house continued to serve as the parish rectory for about twenty more years.
1964, September: Construction begins on a new building that was intended to serve eventually as the parish hall and, in the interim, as a more suitable venue for Mass. This is the present church.
1964, December: The first Mass is celebrated in the new church/hall on Christmas Eve.
1965, March: Archbishop Johnson blesses the new church on March 14.
1969, August: Father Eisenring leaves Saint Stephen’s to pursue graduate studies in psychology at the University of Detroit. Father David Monroe is named parish administrator.
1970, July: Father John Swinkels is appointed the second pastor of Saint Stephen’s. 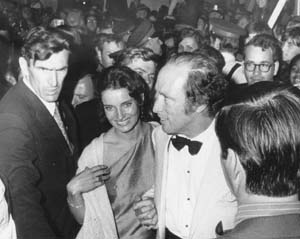 1971, March: Pierre Elliott Trudeau, then the prime minister of Canada, and Margaret Sinclair are married at Saint Stephen’s.

1971, September: Father Lawrence Sabatini, a member of the Congregation of the Missionaries of St. Charles (Scalabrinarians), is appointed third pastor of Saint Stephen’s.